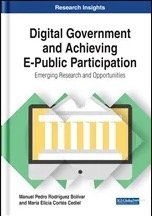 Diffusion of Innovations Among Mexico: The Technology Adoption of State Governments

The purpose of this chapter is to describe the technological adoption by state governments, based on a longitudinal study of technology in Mexico for which the authors analyzed data from all the local governments from 2010 to 2018. With this data, they proposed a ranking to classify adoption technology, using the diffusion of the innovation theory. They included in the analysis other variables such as the percentage of households with a computer, internet, and other communication technology equipment. The results show that Mexico City is the innovator; Baja California, Sonora, and Nuevo Leon are early adopters, while Oaxaca, Chiapas, and Guerrero are laggards. The most influential variable in the adoption of information technologies is illiteracy, and there is an inverse relationship between technology and illiteracy. Future research will open several paths to understand different adoption behaviors between specific technologies in each state, such as big data, artificial intelligence, internet of things, and smart cities.

The adoption of emerging technologies by Mexican state governments is in its earliest stages. Some emerging technologies such as cloud computing, big data, Internet of things, and artificial intelligence are starting to be implemented by governments (Valle-Cruz, 2019). Most of the states in Mexico have a very small advance in the implementation and use of technologies, only making use of static web pages (portals) and social media, even some regions in Mexico do not have Internet services or electricity (SENER, 2017). Despite this, most Mexican state governments are trying to develop and improve portals for service delivery, information dissemination, and implementation of different mechanisms to interact with citizens. The digital divide is a challenge for developing countries (Lu, 2001), because in some regions there a lack of basic technologies like electricity and telephone that avoid the implementation of advanced and emerging technologies. Particularly the Mexican digital divide is a problem of inequality that also reflects the poverty of certain areas in Mexico (Mecinas, 2016).

However, one of the most important technology uses by state governments to interact with citizens is social media, representing a way to improve government-citizen interaction (G2C); it is a mechanism for dissemination of government activities and information, and it represents an efficient communication channel between government and citizens. Social media is also a tool for citizens to make complaints or petitions to their governments, and it is useful for governments to understand citizens’ perception (Valle-Cruz, Sandoval-Almazán, & Gil-García, 2016: p. 1).

In general, there are few empirical studies related to the diffusion of technological innovations in governments (Anderson, Lewis, & Dedehayir, 2015; Chatfield & Reddick, 2018; Wu, J., & Zhang, 2018), and, in a previous research, an explanation was provided to understand, only, the behavior of social media adoptions by governments through the theory of Diffusion of Innovations (Roger, 2003).

Studies related to the diffusion of innovations in government are scarce and this chapter aims to continue with the work done in the article “The Diffusion of Social Media among State Governments in Mexico” published in 2018, where only social media was studied in local governments (Sandoval-Almazán, Valle-Cruz, and Kavanaugh), but analyzing the existing technology data of the Institute of Statistics, Geography and Informatics (INEGI) of the Mexican Government from 2010 to 2018 in order to classify state governments in Mexico based on the Rogers’ Theory of Diffusion of Innovations.

This paper has been organized into five sections, including this introduction. The second section presents the theoretical framework and review of prior research related to technological factors by state governments and different studies related to the diffusion of innovations. The third section describes the methods we used to collect and analyze technological data from all 32 Mexican state governments. In the fourth section, we present our findings and practical ideas. Finally, in the fifth section, we show conclusions and limitations of the study.

A Review of Artificial Intelligence in Government and its Potential from a Public...
Scroll to top